According to Viera y Clavijo, the names of Realejos de Arriba and Realejos de Abajo come from the positions occupied by the Spanish Conquistadors and the Guanches in the final stages of the conquest of Tenerife. It appears that this is where the Guanches, under Bencomo, surrendered.

As the surrender took place on the 25th of July, 1496, the Spaniards decided to build a church on the site, devoted to Santiago Apóstol, the first parish church to be built on Tenerife. It was also where the nine Menceys (kings) of the Guanches and other important natives, were baptised.

But the Governor left Realejos de Arriba without water, so that he could channel it to his water mill, which acted as the centre for Realejos de Abajo to grow up around. The parish church of Nuestra Señora de la Concepción was built to attend to the town's spiritual needs.

Each Realejos had its own mayor, town clerk, official receiver, bailiffs and corn exchanges. Monasteries of San Agustín and San Francisco were soon founded, and a San Agustín convent too.

The wealth of the area came from sugar cane in the 16th century, grapes and wine in the 17th and part of the 18th century, cochineal in the 19th century and bananas in the 20th century.

A decree of the 23rd of December, 1954 granted the request of the two boroughs to merge into one, with the name of Los Realejos. 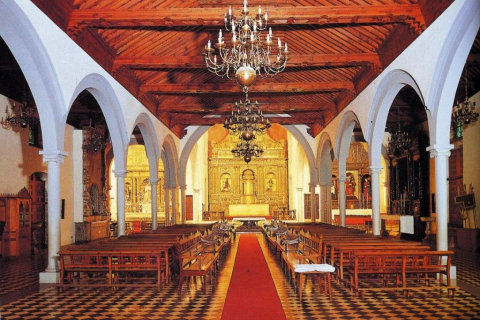