La Laguna appears officially for the first time on the 9th of July, 1497, when Governor Alonso Fernández de Lugo appoints the six magistrates and other members who would make up the first city council.

The city had been founded the year before, in 1496, as a settlement of soldiers and civilians that had grown up around the church of La Concepción., where the first Corpus Christi fiesta was held that year.

But, this original settlement in what would come to be known as Villa de Arriba, would only last three years. Buildings were not very solid and the muddy waters of the lake formed by the almost continuous flow of water down the valleys, made the place unhealthy. It appears that the Governor had the idea of creating a Court with the leading families. All of this led to the prohibition on further building on the original site, in April, 1500. New buildings could only be put up downhill of the Santispiritu Hospital.

By 1510, it had the title of city and, from 1534, the distinction of "Muy Noble y Leal" (Noble and Loyal). It had its own Council as of 1497, governed by its own by-laws, and convents were soon founded, to add to the parish churches of La Concepción and Los Remedios.

The thriving city gradually and carefully took shape in such a way that "it be concentrated and not spread out". Thus, the city centre that can be seen in Torriani's plans of 1590, already existed from the second decade of the 16th century.

As Adrián Alemán points out in his Guide to La Laguna (1986), the city has three outstanding aspects. First, the military aspect; right from the beginning, there is an army presence, originally made up of the men that took part in the conquest. A military presence was maintained over the years at different levels and the official residence of the Captain General of the Canary Islands was transferred to La Laguna in 1723.

Secondly, it is the religious centre of the Island. Apart from the initial parish churches, there were many other ordinary churches and, especially, convents founded by Dominicans, Augustines, Jesuits, Belemites and Female orders. The religious importance of the city reached its peak when the Dioceses of Nivaria was created in 1818-1819, with its seat in the city.

And finally, La Laguna has always been a centre of learning. It had a school from the very early days, which was extended to cover several levels of learning and studies, provided by the clergy until the University of San Fernando de La Laguna was finally created in 1927.

The importance of La Laguna has experienced a certain decline, especially from an administrative perspective, with the growing importance of Santa Cruz de Tenerife, mainly after the volcanic eruption of the 18th century (1706) that destroyed the port of Garachico. 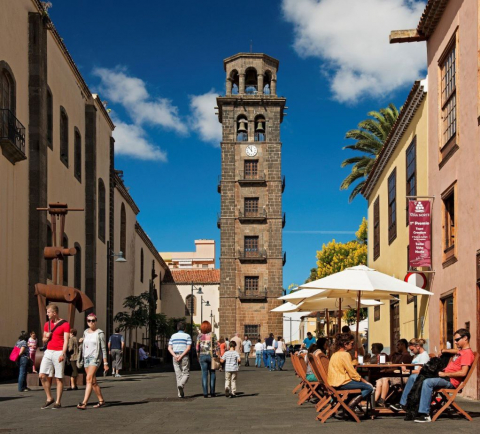