"Candelaria is the town of pious stories and legends" says Luis Diego Cuscoy.

At the end of the 14th century (1390 or 1391), the figure of La Virgen de la Candelaria reached the beaches of Chimisay on the waves of the Ocean. The Mencey (King) of Güimar took it to his cave, where it remained for more than 50 years.

Then Antón, a Christian Guanche, chose the Achibinico Grotto for keeping this Holy figure. Nowadays, the cave is called La Cueva de San Blas, which, according to Cuscoy, was the first Catholic church on the Island.

The figure has remained in the sanctuary that Pedro Fernández de Lugo, Second Governor, ordered built, since 1526. The ajacent convent dates from the 19th century, 1803, when it replaced the original one. This was a convent that acted as a school and even as a chemist, run by Dominicans, who have been the guardians of La Candelaria since 1530.

The original figurine, along with other major works, disappeared in a landslide in 1826. The present figure is the work of Fernando Estévez, who carved it in 1827. Life in Candelaria has always been closely linked to the vicissitudes of the figure and her sanctuary. Several attempts have been made to change the location because of the danger of its lonely situation and the possibility of pirate attacks. 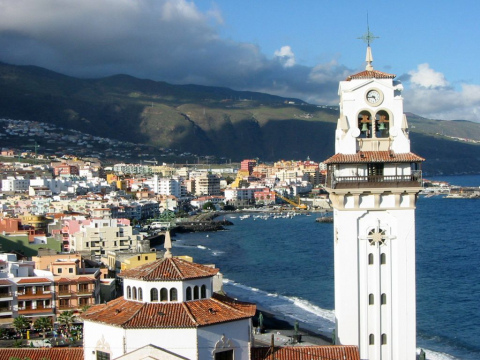