The path starts about 50m to the right of the forest keeper´s house, at Los Pinos Street in an area known as Monte Frío 1. It follows an unpaved path, with lots of fruit trees. You keep going amid stone walls and the typical vegetation of the area: pine-trees, tree-heath, sticky bromms and Canary gums, until you get to some hydraulic works such as the Canal Hoya Grande. The canals now act as a guide, as the path runs between two canals on the right and a third one on the left. Approximately 900m after the start, near the water gauge, you have the option 2 of either going to the right following a narrow path which goes down the canal from Vergara to Pinalete, or going straight along Lomo Grande canal. The two tracks join in a narrow path which goes down towards a flat area and take the narrow path to the left amid a thick, luxurious vegetation with indigenous species such as pines, tree-heaths, Canary gums sprinkled with holly trees and Canary St John´s wort 3.

his path has a lot to do with the importance and culture of the canalisation and good use of underground water by means of the so called "galleries", and the development of hydraulic works together with all the traditional complementary technology which has led to the existence of a canal network, not only for the distribution of water for the farming areas from the mountains down to the sea, but also for the distribution of water between the north of the island and its large urban centres. 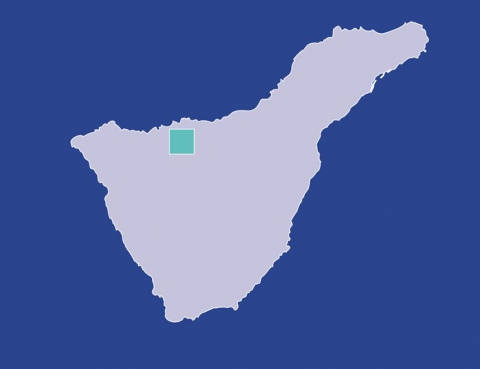