The island is an interwoven puzzle of culture and nature. A variety of geological forms, climatic idiosyncrasies and differences in altitude have given rise to a medley of ecosystems, with a rich diversity of animal and plant species.
43 protected natural areas, stretching over almost half of the island, testify to this natural wealth. Added to these natural values are the culture and history of an island that has been and still is a crossroads between Africa, Europe and America. One result of this cultural hotchpotch has been the denomination of several areas as Places of Cultural Interest, the cultural equivalent to Protected Natural Areas.
Tenerife, then, embraces a thousand and one landscapes. The sheer rocky coastline of the north contrasts sharply with the undulating beaches of the south. If you venture into the mid-altitude area, just below the treeline, you will come across terrace–covered hillsides spread around farmsteads and villages. The larger towns are also steeped in centuries–old island history and the to–ing and fro–ing of people and goods on both sides of the Atlantic–.
Higher up, green pine groves and laurel forests that provide shelter for a rich diversity of wildlife unfold before your eyes. Still higher, above 2,000 metres of altitude, the peaks are untouched by the sea of clouds, formed by the trade winds; under a burning sun and whipped by winds, in the coldest winters they are blanketed in snow. All these landscapes contain proof of ancient and recent vulcanism, but if there is one place where geology becomes particularly important it is without a doubt Mount Teide National Park. Here successive volcanic eruptions have spattered the landscape with a wide range of colours and textures.
If you spend some time travelling around the island, the numerous vantage points you will find dotted along the roads are a good way of getting a glimpse of Tenerife’s varied scenery. 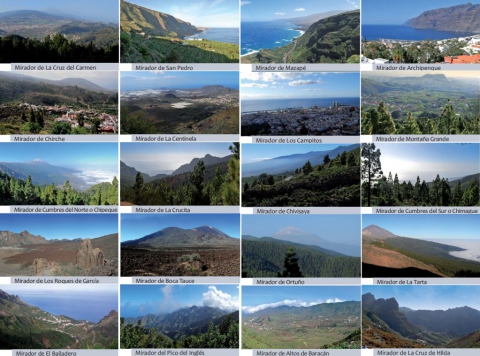