Paganism, religion, jubilation, tradition, history, culture and identity all roll into one in the island’s great celebrations known as romerías—a kind of procession with folk dressed in traditional attire, accompanied by traditional singing and dancing, in honour of a saint.
On May 5th 2019, Tegueste holds its romería paying tribute to St. Mark (San Marcos). This is followed by celebrations in honour of St. Isidro Labrador in Los Realejos on 15th May and 2nd June. Then come other romerías held in the north and south of the island, including St. Isidro Labrador and St. María de la Cabeza in Las Mercedes (May) and Guamasa (June) (La Laguna), La Orotava (June 30th) and Tacoronte (July), St. Benedict in La Laguna (July 14th), San Roque in Garachico (August 16th ), St. Augustine in Arafo and San Roque in Vilaflor  (end of August) and San Miguel on September.
In Tenerife, romerías were historically celebrated by the upper classes. Dressed in farming attire, they would get together to emulate country traditions, drink local wine and eat goat’s meat and beef as part of a religious cult to the saints closely bound up with the harvest, water and the land. These celebrations gradually became more popular and what was once an exclusive festivity was now open to all. Nowadays, romerías like that of Los Realejos, for example, also include traditional sports (goatherd’s crook, stick fighting and wrestling) and displays of traditional farming activities, which help stimulate a commitment to cultural values. Activities such as wheat threshing, and milking goats and cows feature alongside craftwork displays including basketry, clay pottery, openwork, embroidery, traditional desserts and toys.
Romerías are largely street festivals, but with a strong commitment to keeping farming and stockbreeding traditions alive. They are highly idiosyncratic events with their own flavour, aromas, traditional costumes and sounds. Timples (5- or 4-string guitar), lutes and guitars can be heard alongside chácaras (large castanet-like instruments) and drums.
Attending any of the romerías in Tenerife is a chance to enjoy what are by far the island’s most popular festivals. In Tegueste, colourful floats, decorated with fruits and seeds, imitate boats and surprise visitors with their highly creative designs. In Los Realejos, there is a chance to enjoy the new wine produced in this wine-producing region. And in August, the southern town of Arafo celebrates its water festival in honour of St. Augustine. 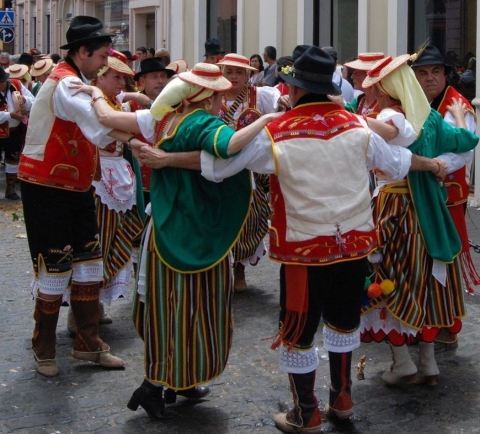