Volcanism in the Canary Islands belongs to the alkaline series, with basaltic rock predominating, although a whole range of rocks derived from the original basaltic magma have emerged. The evolution culminates in elements such as trachytes and phonolites, which are particularly abundant on the island of Tenerife.
Viscosity is an essential feature of magma: so basaltic eruptions are more fluid and the lava flows over long distances, whilst gasses continually escape from the eruption centre; more highly evolved magma - trachytic -, on the other hand, is more viscous and the lava can not flow as far. It builds up in great masses close to the mouth of the volcano, below which gasses concentrate and are violently and dangerously expelled from time to time.

The Garachico eruption (1706): On the 5th of May, 1706, about 8 kilometres south of the town of Garachico, Montaña Negra came to life in an eruption that lasted nine days. Of all the historical eruptions in Tenerife, this is the only single point one and also, the only one that has caused considerable material damage.

The Chahorra eruption (1798): This is the only historical eruption that has occurred within the boundaries of what is now the Teide national park. The eruption started on the slopes of Pico Viejo, on the 9th of June, 1798 and continued until the 8th of September of the same year. This is the longest-lasting of all the historical eruptions that have happened in Tenerife. 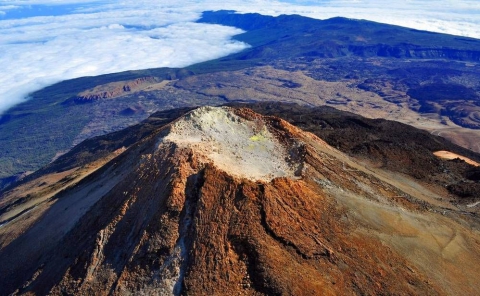